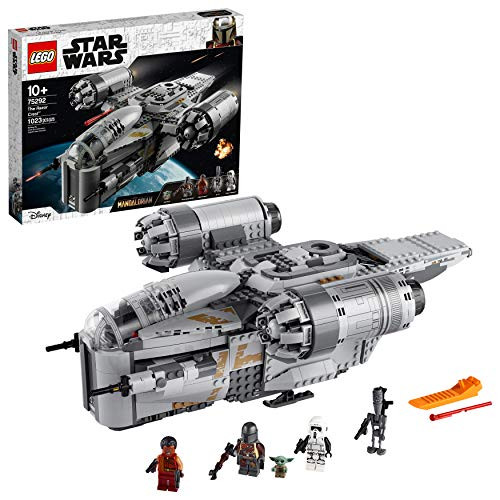 This item is open box. Box has some damage, but all contents inside are sealed in there individual pouches. All pieces and manuals are included.

Details: Relive bounty hunter The Mandalorian and the Child’s battles against Scout Trooper and other enemies with The Razor Crest (75292) LEGO Star Wars building toy for kids. This brick-built armored transport shuttle features a cargo hold with opening sides that double as access ramps and carbonite bounty elements inside, a dual LEGO minifigure cockpit, spring-loaded shooters, escape pod and more authentic details to inspire creative play. A challenging build for ages 10 and up, this 1,023-piece starship construction kit includes 5 collectible LEGO Star Wars characters, including The Mandalorian and the Child LEGO minifigures. It’s great for role play and combines with other LEGO Star Wars sets for even more action. Since 1999, the LEGO Group has been recreating iconic starships, vehicles, locations and characters from the legendary Star Wars universe. LEGO Star Wars building toys are hugely popular with awesome gift ideas for all ages.