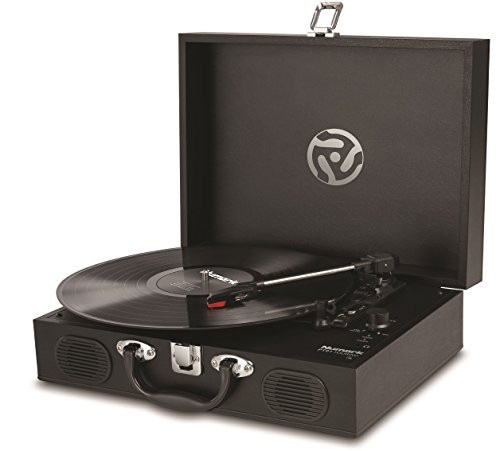 Warranty: 1 year from date of purchase.

The Numark PT01 Touring turntable is a classically-styled suitcase unit that recalls the popular portable turntables from the past.

PT01 Touring has a rugged case with a handle so you can carry it anywhere. It plays all your 33 1/3, 45 and 78 RPM records, comes with a 45 RPM adapter, and it has built-in stereo speakers for convenient listening without needing to connect external speakers.

In addition, it has RCA outputs for simple connection to home audio equipment and a convenient Auto-Stop feature kicks in when it reaches the end of the record.

With its USB port, included USB cable and downloadable EZ Vinyl/Tape Converter software, converting analog records into digital files for archiving on your computer is a snap.

PT01 Touring far surpasses the old suitcase turntables in versatility, however. It can also operate on its own built-in rechargeable battery-which means you can enjoy your records even if you’re not near a wall plug.

How long does the PT01 Touring’s battery last?
The PT01 Touring has a built-in lithium ion battery which should last about 4 hours after a full charge.

Note: While the PT01 Touring does not include a USB wall adapter, chances are you already own one. These are often included with mobile phones, tablets, e-readers, and other personal electronic devices.

Can I use the PT01 Touring to convert my records to digital?
Yes! the PT01 Touring includes EZ Vinyl & Tape Converter, which allows you to record your records directly to your computer so that you can convert them to MP3.

Brain Body Diet: 40 Days to a Lean, Calm, Energized, and Happy Self