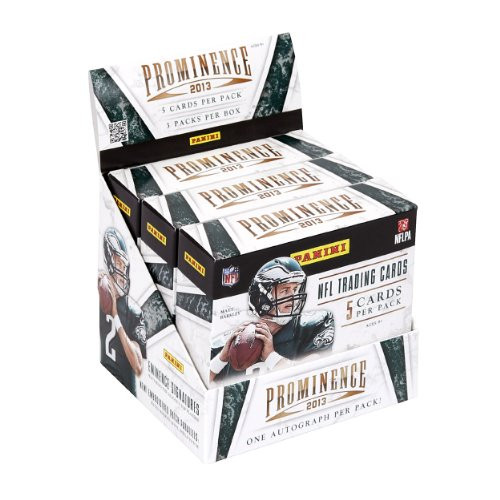 Details: A new configuration for Prominence and new inserts. Each box now has 3 packs of 5 cards (vs. 1 pack of 8 in '12). Each pack has an autographed card for 3 in total, an increase of 1 auto per box and there are no common game used relic cards in the 2013 edition- any relic is a big relic as it will be autographed. New. Embroidered Patch parallels - Rated Rookie (numbered to 249 or less) and NFL Shield Patch (numbered to 1) Autographed Nameplate Letters make a comeback this year for an exciting rookie class. Signed at the NFLPA Rookie Premiere, spells out your favorite player's last name all numbered to 249 or less Making its debut in Prominence, look for Rookie Signature Gridiron Gems all numbered to 249 All Autographs - every hit is now a signature card, including short-printed dual and triple autographed E-minence Signatures. New Rookie Gridiron Gems Signatures - the fan favorite RC from Gridiron Gear now makes its first appearance in 2013 Prominence. New Embroidered Patch parallels including Rated Rookie (numbered to 249 or less), NFL Shield Patch (numbered to 1). Each pack will contain one autograph, one rookie and one common.